You are here: Home / News / There'll be no repeat champion at the U.S. Senior Open this year 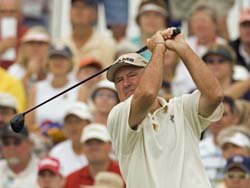 Allen Doyle came to Whistling Straits and the U.S. Senior Open as the two-time defending champion.  There'll be no chance of a three-peat.

Doyle's first round is one he'd like to forget, a 11-over par 83.  He bounced back in the second round today with an even par 72, but not nearly enough to avoid the cut.

Despite Doyle's back to back titles over the last two years, not much thought was given to Doyle winning a third.  His name never came up in conversation.  Of course that's that way it was the first two times he won it.

Doyle said his departure from the field after two rounds had nothing to do with the course.  In fact he said conditions were as favorable as the players could hope for at Whistling Straits.

Listen / Download – Doyle on the disappointment of a poor performance at the Senior Open. :19