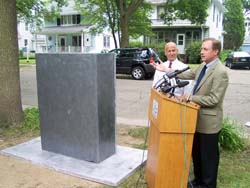 Cieslewicz says the devices are not needed to provide services more advanced technology were used, even if it would cost more to do so. AT&T spokesman Jeff Bentoff says the boxes are part of a $6 million upgrade, and are exactly what is needed to improve video and Internet services for customers.
Cieslewicz says the boxes are an eyesore and invite vandalism. He believes any put in Madison will just be "graffiti magnets."

AT&T wants to begin offering TV services if a proposed Video Competition Act is passed at the Capitol. The bill would allow companies to negotiate statewide franchise agreements, instead of going through local officials.

Mayor Dave raised concerns during a Monday press conference about that bill, and how it might prevent local governments from controlling where those utility boxes will be placed. He says the legislation would limit the power of cities statewide to control public right-of-ways. Bentoff says cities would still have a chance to be heard about potential locations for the video utility boxes.