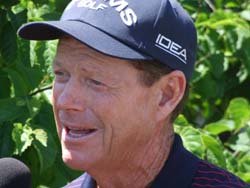 Tom Watson has never won the U.S. Senior Open .  He has second place finishes in 2002, 2003 and 2006.  Watson will get another shot to win his first this year after firing a 6 under par 66 to go 8-under par and hold the clubhouse lead at Whistling Straits in Haven, WI.

With the second round still in progress, Watson has a three shot lead on Loren Roberts, Des Smyth and Lonnie Nielsen.

Watson recorded 8 birdies and 2 bogeys in his second round.