You are here: Home / News / Wisconsin contingent fails to make the cut at U.S. Senior Open 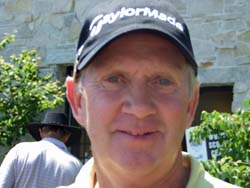 The three golfers with Wisconsin ties competing at the U.S. Senior Open this week won't be playing on the weekend.

Mukwonago's Mark Bemowski finished the two days at 8 over par and the project cut line is between 4 and 5 over par.

Jim Rollefson of New Berlin was even further back as he wrapped up his round and Peter Krause (pictured) of Eden Prairie, Minnesota finished 3 over today, but 10 over for the tournament.  Krause was born in Marinette and grew up in Coleman, Wisconsin.