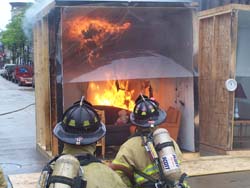 Wisconsin firefighters say sprinklers can save lives, and the Madison Fire Department provided a demonstration to that effect Tuesday morning. They set fire to two makeshift apartment models, one with sprinklers, one without.

The one with sprinklers was quickly put out as the fire was just starting. The furniture inside was left wet, but barely singed. The unit without sprinklers quickly grew to a full inferno, which Fire Marshal Ed Ruckriegel said almost nobody could survive in.

The demonstration came as lawmakers are being asked to consider new building regulations, which include a rule change that requires more multi-family housing units to have fire sprinklers. State regulations currently require any housing complex with at least 21 units to install sprinklers. State Commerce Secretary Mary Burke told a legislative panel Tuesday that the agency wants to lower that number to any new construction containing at least three units, so the state is in line with international standards.

Opponents say Commerce doesn't have the authority to change the requirement, only the legislature does. Leon Church, a home builder from the Fox River Valley, also argued the requirement adds to the cost of new construction. He says his projects with sprinklers have seen an extra $6,000 per unit spent when sprinklers are required.

Professional Firefighters of Wisconsin president Rick Gale says opponents are using technicalities to protect their bottom line. He says the issue comes down to cutting costs or saving lives.

A legislative panel on Tuesday approved the overall changes to the state's building code on a 5-2 vote. However, action on the new sprinkler requirement was delayed and the provision was sent to the Joint Committee on Administrative Rules for further review.