You are here: Home / Taxes / Calculating the cost of war 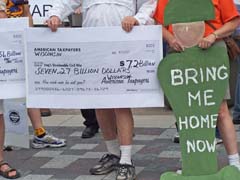 A new report estimates the cost of the War in Iraq for Wisconsin taxpayers.

The study from MoveOn.org shows what taxpayers in each state have spent fighting the war since it began. Judy Skog, with the group's Madison chapter, says the cost for Wisconsin taxpayers so far has topped $7.27 billion.

Skog says that money could be going towards providing important programs, such as health care, child care, and student financial aid. Instead, she says all those funds have been wasted on a war the US can't win.

MoveOn.org chapters across the country delivered the report on Thursday to members of Congress. They're hoping it will make the message clear that Americans can't afford to keep funding the war. The group wants lawmakers to reject a new war funding bill due for a vote this fall.