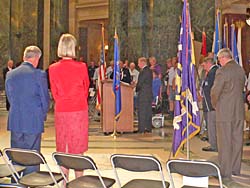 Governor Jim Doyle proclaims August 7 as Purple Heart Day in Wisconsin with a ceremony in the state capitol rotunda.

Talking to the crowd which includes members of the military, veterans service organizations, and many Purple Heart recipients, Governor Doyle says the Purple Heart is more than just a medal. "The Purple Heart has been one of our nation's highest honors. It is also one of our most somber and hallowed honors."

Doyle says since 9-11, 2001, more than 140 Wisconsin soldiers have been awarded the purple heart, and hundreds more have earned the medal since it has been rediscovered and renamed in 1932 … some of whom were recognized at the capitol ceremony. "On behalf of the state of Wisconsin I want to thank you for your incredible bravery and dedication."

Also speaking at the event were Lt. Governor Barbara Lawton, Major General Al Wilkening and acting Veterans Secretary Bill Kloster. The Purple Heart is awarded to any service member who is wounded or killed while serving his country.

"We owe these brave people AND their families a debt of gratitude that can never be repaid." But, Doyle says, what we can do, is pledge to remember their service and honor their sacrifice.

NOTE: In 2003, Sergeant Susan Sonnheim became the first soldier in the Wisconsin Army National Guard since World War II to be awarded the Purple Heart – and the first woman in history of the Wisconsin Guard.