You are here: Home / Recreation / Entertainment / Elvis lives … in Wisconsin 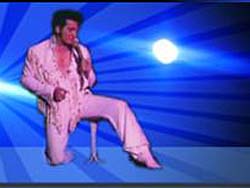 Fans worldwide observe the 30th anniversary of Elvis' death, including the biggest fan from Wisconsin.

Garry Wesley has been an Elvis Presley fan since as long as he can remember. "Once you become an Elvis fan, I think you're an Elvis fan for life."

The man who had humble beginnings on a farm in the small town of Willard in west central Wisconsin has traveled the world impersonating the King of rock-n-roll, and is currently performing for his 19th consecutive year at "Elvis Week" in Memphis. Wesley laughs, "It's been one heck of a ride so far, so hopefully I'll be able to hang onto it for a little while longer."

Three-decades after his death, people still love Elvis' songs and even swoon at the mere mention of his name. Wesley says it's hard to explain people's continued attraction to the cultural icon, but speculates it's partly due to his being an actor , singer and all around performer with a unique voice and presentation.

"He was such a unique entertainer and personality and person — a generous person, a very gracious person — and very humble. You know he came from humble beginnings and I think that has a lot to do with it."

Wesley remembers being in shock 30 years ago when he first heard of Elvis' death . He recalls working in a factory as a teenager when the announcement came over the radio; he and his friends couldn't believe the news, insisting it was just a very bad joke.

"Every one of us were just like shocked. We actually teared up. I mean, it was just like losing somebody in our family. Because he has always been there, you know he was always there, he was always in you know the movies or on TV you know or his music. It was like a constant."

Elvis died August 16, 1977 at the age of 42 from heart failure at his Graceland home in Memphis.

NOTE: Alfreds, located on famous Beale Street in Memphis Tennessee, attracts people from around the world. Garry & his wife Elaine (Patsy Cline) have performed at this historical night club for 19 years. (901-525-3711)