You are here: Home / Packers / Jenkins off to fast start with new contract 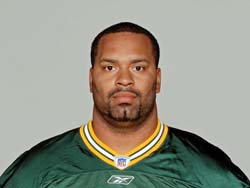 Cullen Jenkins signed a new 4-year, $16-million free agent contract in the offseason with the Green Bay Packers .  He's already off to a good start in convincing the Packers and their fans that he deserves it.

Jenkins recorded two sacks and forced and recovered a fumble in the Packers 13-9 win over the Pittsburgh Steelers in their preseason opener on Saturday night.

Jenkins is having an outstanding training camp and he's eager to carry it into the regular season and have a great year.

Jenkins had a career-high 6 1/2 sacks last season.  He replaced Kabeer Gbaja-Biamila at defensive end late in the season.