You are here: Home / Environment / Conservation / Mercury clean-up at ERCO is underway 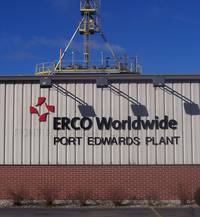 The state's number one mercury polluter begins the process of eliminating mercury emissions.

"We expect to start on this immediately."

ERCO Worldwide President Paul Timmons, earlier this week, announced the company would spend $95-million to convert its Port Edwards facility to a mercury-free membrane technology. Mercury Free Wisconsin and other environmental groups have been urging this transition for years. Oceana had named the plant one of the nation's " filthy five ." So, what took so long? Well, Timmons points out they only acquired the property two years ago, so he thinks they acted pretty quickly.

"I think we moved along pretty quickly. And, you know, the most compelling reasons are that number one, it makes a lot of economic sense; number two, it's appropriate and good for the environment and obviously for the people that work there; and number three, it's a market situation that is quite compelling."

They won't reduce that pollution by just a small percentage, either; Timmons says mercury emissions will be reduced to zero . Aside from some minor disruptions to current operations, this change-over is a win, win, win situation.

Former DNR Secretary George Meyer, who now heads the Wisconsin Wildlife Federation , says fish-eaters will be grateful for the improvements. ERCO currently spews out 25% of the state's mercury. Timmons says the project will extend the life of the plant by up to 30 years, increase its cash flow, and preserve jobs. Timmons makes a point to thank the employees, and neighbors, for their understanding during this process.

"I really want to thank them and clearly the support that we've had from our neighbors and the community people in the local region around the plant at Port Edwards."

Timmons says the project is already in the planning stages, they are sorting through the details of engineering, and checking into permits. The transition should be complete in about two years.

NOTE: State Senator Neal Kedzie boasts in the Milwaukee Journal Sentinel that this action was taken without a mandate from the government.