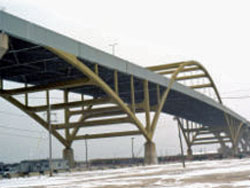 Federal transportation officials want states to inspect all bridges that are similar to the one that collapsed in Minneapolis. Wisconsin will comply.

Wisconsin's chief bridge engineer Finn Hubbard says there are sixteen deck-truss design bridges in the state that will be inspected right away and once they know what happened in Minneapolis they'll take a second look if any specific design problems are cited.

There are also twenty-one hundred bridges in the state that are listed as structurally deficient by federal standards. But Hubbard insists that doesn't mean they are unsafe.

Hubbard says a deficient bridge usually means there is some work they want to do on it in the future or handle by changing weight limits for vehicles using the bridge.

But Hubbard says motorists should feel confident that bridges are safe and can be used without worry.