You are here: Home / Military / Statement from family of Iraq chopper crash victim 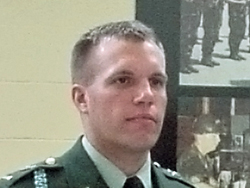 The family of Army Captain Derek Dobogai issued a statement Friday about the death of the Fond du Lac soldier in a Black Hawk helicopter crash in northern Iraq. The statement from his parents David and Lisa and brothers David Jr. and Daniel Dobogai says in part, “Words cannot express our sadness or convey how much he will be missed. It was Derek's dream to serve America and his life ended during this service.” They thank everyone for their kind thoughts and prayers. Their statement also includes a quote from Captain Dobogai, which says what he learned while attending Winnebago Lutheran Academy is “that God is the one who is in charge of everything. All I need to do is trust in Him, and He will lead me where I need to go.” Captain Dobogai is the second soldier from Fond du Lac to die in the war in Iraq. Army Specialist John Tollefson was killed by an improvised explosive device while driving a humvee in northern Baghdad in July of 2005.