You are here: Home / Politics / Govt / Tommy ends his race to White House 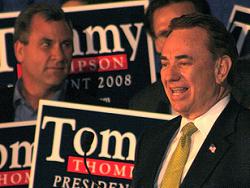 Thompson repeatedly said he had to finish first or second in the Straw Poll, or he would drop out of the race.  Even before the votes were counted Saturday, it was apparent the size of Thompson's crowd wasn't going to carry the day, yet Thompson wasn't ready to concede.  “It's in the hands of the Lord right now,” Thompson told reporters. But Sunday night, it was in the hands of Thompson's Iowa campaign manager, who issued a statement confirming Thompson was dropping out of the race. On Saturday, Thompson began his final speech as a presidential candidate with a hat tip to a group the Thompson campaign had dubbed “SOTTs” — Supporters of Tommy Thompson.