You are here: Home / Badgers / Are the Badgers ready for the Big Ten? 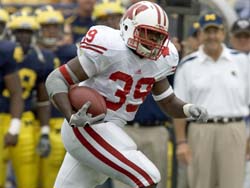 The Wisconsin Badgers are still unbeaten (3-0) and have the nation's longest active winning streak at 12-games, but Badger fans must be a little uneasy about their 7th ranked team heading into the Big Ten opener this week against the Iowa Hawkeyes at Camp Randall Stadium.

The Badgers struggled again in the first half, going into the lockerroom tied with The Citadel 21-21.  The Badgers entered halftime under a chorus of boos.

The Badgers went on to win 45-31, but they were gashed by The Citadel for 245 first half yards.

The concerns started in the opener, but got stronger in last weeks road win at UNLV.  Now, after the win over The Citadel, it makes one wonder.

P.J. Hill (pictured) rushed for 168 yards and five touchdowns and the offense isn't a big concern.  But the same can't be said for the defense.

Maybe the Badgers are just bored with the 1-AA type teams!  Badger fans are hoping that's the case because beating Michigan in Madison near the end of the season no longer holds that monumental significance.  If the Badgers want to get into the BSC and figure into the title picture, they have to win, win, win.  I'm just not sure this defense has what it takes!