You are here: Home / Politics / Govt / Bangin' for reform 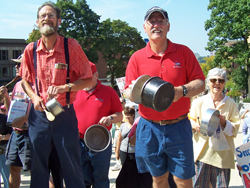 The People's Legislature brought pots and pans to the Capitol Tuesday. Converging on the State Street entrance of the Capitol, People's Legislature members brought a message of campaign finance reform, aimed at legislators and Governor Jim Doyle. About 100 people were on hand, many banging on pots and pans in support of speakers. Along with the calls for reform, there were also some requests for lawmakers to settle the state budget, which is now more than two and a half months overdue.