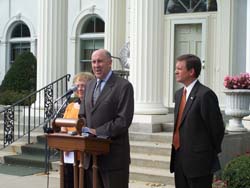 State budget negotiations got underway this morning at the Governor's mansion.

Legislative leaders and Governor Jim Doyle say they're optimistic about the budget talks leading to a compromise. During a morning press conference at the Executive Residence, the Governor thanks Assembly Speaker Mike Huebsch (R-West Salem) and Senate Majority Leader Judy Robson (D-Beloit) for agreeing to attend the meetings. Doyle says their willingness shows they understand the budget is something that must get done.

Speaker Huebsch says he'll work with Democrats, but expressed continued concerns about tax hikes in the budget. He says Republicans will give an honest effort, but there's a huge challenge to overcome in the tax levels included in the budget.

However, Senate Majority Leader Judy Robson (D-Beloit) says they're goals remain clear to deliver a complete state budget. She says lawmakers have a responsibility to get the job done.

The Governor and lawmakers have no specific agenda for the talks, but say they'll keep working to reach a budget agreement as quickly as possible.