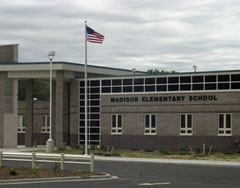 Senate Republicans want a Friday floor session on K-12 funding. As budget negotiations continue at the governor's mansion , Senate Minority Leader Scott Fitzgerald says that chamber needs to act now, on funding schools. "They're setting their budgets right now," says Fitzgerald. "I'm watching the districts in my own Senate seat set that budget, set that number, based on DPI ( Department of Public Instruction ) figures from July. And they are in for a huge shock, if this process continues to move forward through October 15th."

That's the date DPI is supposed to get state funding numbers to local districts. But state Superintendent, Libby Burmaster has said Friday is the last day K-12 funding can be passed , or property taxes could go up by some $600 million statewide. Senator Joe Leibham explains the local hit in his district: "A $700,000 increase on Sheboygan Area School District taxpayers, if the September 28th deadline isn't met." Fitzgerald and Leibham held a press conference outside the Senate chambers Thursday, along with Senator Glenn Grothman, who made one more appeal for a Senate floor session, along with a dig at Democrats led by Majority Leader Judy Robson: "obviously . . . the Senate Democrats are deciding to hold the property taxpayer hostage, as they are holding out for a lot of liberal policy, and spending in other areas."

There will no Senate floor session. The comment from Robson : "Legislative leaders are too busy working to get a budget done to stop and play politics and pull political stunts." But Fitzgerald says there's no way a budget will be completed by tomorrow, and school districts, faced with funding shortfalls because of the budget delay, will be forced to raise property taxes.