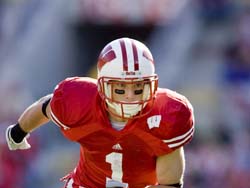 Wisconsin starting quarterback Tyler Donovan tossed three touchdown passes and ran for another as the 7th ranked Badgers beat Washington State 42-21 in the season opener for both teams.

The Badgers trailed 14-7 in the first quarter, then put up 21 unanswered points before the end of the first half and the Badgers went on to win it.

Donovan went 19 for 29 for 284 yards on the game before Allan Evridge mopped up late.  Luke Swan (pictured) caught 8 of those passes for a career-high 170 yards.  P.J. Hill carried the ball 21 times for 84 yards and a pair of touchdowns.

Defensively, the Badgers struggled a bit, but were good enough to bend and not break.

The Badgers should be the highest ranked team in the Big Ten when the new polls come out next week.  That's because Michigan was knocked off by Appalachian State in a major upset 34-32.