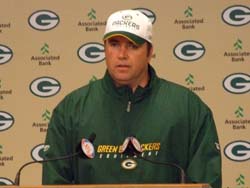 Green Bay Packers head coach Mike McCarthy was surprised at the second-guessing by the media in regards to his decision to call a pass plays and go with an empty backfield when the Packers had the ball at the San Diego 1 yard line late in Sunday's win.

The Packers failed to score on the series after Brett Favre's pass to Bubba Franks on fourth down was knocked down at the line of scrimmage.  McCarthy on Monday suggested that Favre had better options to go to with the football than the one he chose.