You are here: Home / Politics / Govt / People's Legislature to rally at capitol 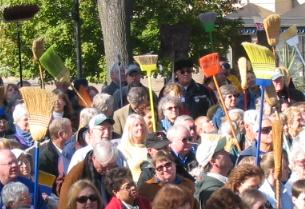 The People's Legislature provides a home for the politically homeless, and today (Tues) they'll also have a voice at the state capitol.

If lawmakers don't get their act together and pass a budget, Mike McCabe of the Wisconsin Democracy Campaign says, there will be some very real consequences that will hit us right in the wallet. And for those who say the public just doesn't care, McCabe says that's not true. He says people pay more attention to Wisconsin politics, and they care more deeply, than they are given credit for.

"You hear a lot of talk about how apathetic citizens are and I don't personally run into apathy so much as I run into powerlessness – People who care deeply about the problems – and they're fed up and disgusted with how the people's business is being done at the capitol, but they just don't think that they can do anything about it."

McCabe says good things happen when good citizens get involved and put pressure on their elected officials. That's what the People's Legislature is all about.

"We can't buy politicians; we can't make the campaign contributions – we can't even make a good down payment. We don't have the money to pay $200-an-hour lobbyists to do our bidding in the halls of the capitol; we can't pay PR (public relation) firms to do :30-second ads that we can run on television to shape public opinion."

McCabe says the growing popularity of the People's Legislature says a lot about how hungry people are for a better political process at the capitol. He says this legislature has grown increasingly dysfunctional, and that's illustrated by the inability to deliver a budget, which is already 2-1/2 months overdue. McCabe says the People's legislature gives the politically homeless an avenue they can use to make a difference.

NOTE: The People's Legislature will rally at the state capitol at noon. Participants are urged to bring pots and pans to bang on. (Previous story: Clean government advocates rally, to sweep out the Capitol .)