You are here: Home / Packers / Rayner to work out for Giants 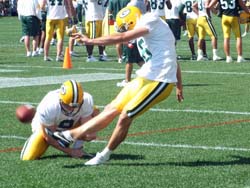 Kicker Dave Rayner, who was released by the Green Bay Packers on Saturday, will work out for the New York Giants today.

The Packers tried to trade Rayner to the Giants for halfback Ryan Grant, but the Giants wanted a draft pick instead.

The Giants currently have kicker Lawrence Tynes on thier roster, but if things go well for Rayner, he could take over the job prior to the season opener this coming weekend.