You are here: Home / Military / Returned to Rummy 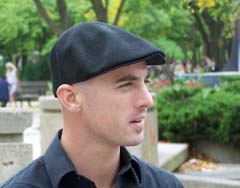 A Wisconsin Iraq war vet returns his medals. Josh Gaines of Madison is a former Wisconsin Army Reserve member. He's mailing former Defense Secretary Don Rumsfeld the National Defense and Global War on Terrorism medals he received for serving in Iraq: “I truly do not believe that I defended my nation's best interests . . I don't believe that I help stopped the war on terrorism in Iraq.”

Gaines says knowing the 9-11 hijackers were not Iraqis, and that WMDs had not been found, was “frustrating.” He also questions the use of private security employed by the firm KBR. “They would kind of rub it in our face, about how much more money they made and how we made a mistake by signing on the dotted line with Uncle Sam.”

Gaines and his fellow Wisconsinites served in a unit with Army Reservists from Puerto Rico, and he believes that affiliation is why their unit, rather than the KBR personnel, was blamed for missing inventory at the base they guarded. Gaines is mailing his medals to Rumsfeld 's office at Stanford University.