You are here: Home / Politics / Govt / Their medicine's not legal yet 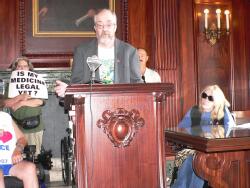 That legislation, cosponsored by Representatives Frank Boyle (D-Superior) and Mark Pocan (D-Madison), is similar to laws already in 12 states. It would allow patients with debilitating medical conditions to have access to marijuana to ease their pain. Jacki Rickert is in severe pain, and had discovered that cannabis really works for her.

"You see living, breathing, rolling, walking evidence right here. We wouldn't come all this way to lie to you. Why would anyone lie about something like this? It would be much easier to just stay at home and go, 'hey, it's not my problem.'"

J.F. Oschwald of Colorado is confined to a wheelchair, and he says cannabis eases some of his pain.

Oschwald got a little choked up when he dreamed about a day that he "wouldn't be illegal in 38 states." Patient activist Gary Storck  (also of the group Is My Medicine Legal Yet –  IMMLY ) credits pot for saving the lives of some of his ailing friends.

"Just live some kind of quality of life, that's all we ask for. You know a lot of us would be in a box today if it weren't for cannabis."

Stork says pot is the best treatment for our soldiers who are suffering from post traumatic stress disorder. For those opposed to smoking marijuana, one supporter emphasized that you don't have to smoke it. You can reap the benefits via vaporization and eating the stuff.

NOTE2: September 18 is the ten-year anniversary of the date that Jacki Rickert reached the Wisconsin State Capitol after a weeklong wheelchair march from Mondovi, dubbed the 1997 Wisconsin Journey for Justice. (Also see MadisonNORML.org )