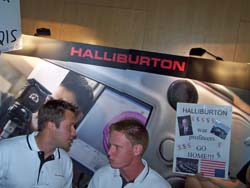 UW Madison students rallied Wednesday, against on campus recruiting by Haliburton. Protest organizer Chris Dols , with Campus Antiwar Network , got the rally started outside Bascom Hall on the Madison campus.

"We have self respect. The university has no respect for us," said Dols. "They sell us like products to war profiteers, to companies like Haliburton." (Haliburton no longer owns its one time subsidiary KBR, which supplies a variety of logistical support for operations in Iraq.)

About 200 students then marched several blocks to the UW College of Engineering, where a job fair included recruiters from Haliburton. "If we can show all the other Campus Antiwar Network Chapters on all the other campuses around the country, that if UW Madison can stand up to a war profiteering company like Haliburton, they all can," said organizer Zach Heise. The protesters were required to not block access to the Haliburton table, where three men talked with several students, but not the media. The protest was inspired in part by similar action against Dow Chemical in 1967.