You are here: Home / Agriculture / A one ton pumpkin? 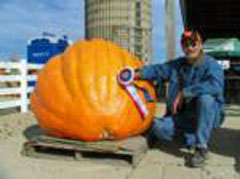 They're big, and they're usually (though not always) orange. Growing big pumpkins — REALLY big pumpkins — is a specialty for a small group of people in Wisconsin and around the country. UW Horticulture Professor Irwin Goldman says pumpkins are perfect for growing big in Wisconsin. “From the North American gardener's perspective, it's definitely the largest vegetable,” says Goldman, noting it's possible to grow pumpkins of over a thousand pounds. “I think any time you can get a vegetable that large it's going to capture peoples' attention.”

The operative word in growing giant pumpkins is clearly GROWING. “These pumpkins grow between 25 and 50 pounds . . per 24 hour period” during the peak growing season, says Dan Bowles, a grower of giant pumpkins (compare his pumpkins to “half a Volkswagon,” says Bowles) from Eagle River. How big can a pumpkin grow? “This year out on the west coast, some of the winners were in the 1500 pound range,” says Prof. Goldman. ” So, I think we'll definitely approach the one ton pumpkin, without question.” Dan Bowles also believes a one ton pumpkin is just around the corner: “there's not a doubt in my mind,” says the grower.

Bowles and other growers converge on Eugsters Farm Market in Stoughton on Saturday, for the annual Land of the Giants weigh off .