You are here: Home / Badgers / Badgers defense to be tested by Indiana 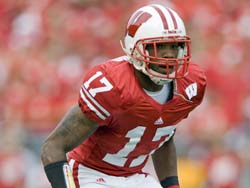 The 25th ranked Wisconsin Badgers play their homecoming game on Saturday at Camp Randall Stadium in Madison.  Wisconsin has struggled against spread offenses and that's exactly what they're going to get with the Hoosiers on Saturday.

Indiana is led by quarterback Kellen Lewis and his favorite target, 6'7, 220lb James Hardy.  Hardy has caught 45 passes for 748 yards and 11 touchdowns.  In all, the Hoosiers have three other receivers besides Hardy, that have caught at least 15 passes on the season.  That's the challenge for defensive back Allen Langford (pictured) and the Badger defense to try and control.

The Badgers are playing their 100th homecoming game.  Ten of those have come against the Indiana Hoosiers with the Badgers going 8-2 in those ten games.

The Badgers carry a 12-game home field unbeaten streak in to the game.  Kickoff is set for just after 11am at Camp Randall.

Listen / Download – Langford on the key to defensing James Hardy. :18