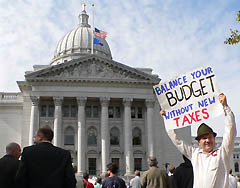 Dueling rallies take place at the capitol, as some shout "No new taxes!"

Members of the anti-tax group 'Americans for Prosperity' want fiscal responsibility in state government. Chairman of the state Republican Party, Reince Priebus says people who oppose a new budget with higher taxes need to fight back against the propaganda of the Democrats.

"We are not extreme because we ask for tax relief. The Democrats are extreme for wanting to increase state spending by 18-billion dollars.

Governor Jim Doyle on Monday called lawmakers back for a special session to vote on a new compromise budget he had put together. Republicans voted against it.  Priebus says Doyle can make it look like he offered a budget compromise, but it's no compromise at all.

"What do you think about increasing real estate taxes?" The crowd answers "No" to this and all Priebus' questions. "…Hospital taxes? Cigarette taxes? Gas taxes? What about more government bureaucrats?"

Capitol Police estimate that there were about 350 participants at the rally, with about 800 members of AFSCME in the counter-rally. Officials say both rallies were peaceful and there were no arrests or police incidents. (related stories 1 , 2 )