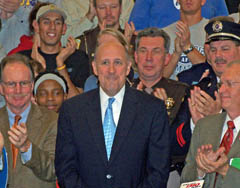 Finally, the end of Wisconsin's budget road. Governor Jim Doyle signed the two year spending plan at the UW Memorial Union, backed by students from throughout the UW System to highlight the budget's investments in higher education. Doyle made a point of thanking legislative leaders, Assembly Speaker Mike Huebsch, Assembly Minority Leader Jim Kreueser, and Senate Majority Leader Judy Robson, who was forced out of the leadership position immediately after passage of the budget. "We got to the point where we're here to talk about a very good budget. Mr. Speaker, thank you very much for what you've done," Doyle said, adding "I'll take a little shot at Mike here, he deserves it."

Doyle used his line item veto sparingly. The only major change to the financial arrangements contained in the budget was Doyle's veto of the 2% property tax levy limit on local governments. "I have given these communities a little bit more leeway to deal with the essential needs of police and fire," said Doyle, who also  also vetoed a 4% levy limit Republican legislators had placed on the state's vocational colleges. Doyle also vetoed a controversial measure that would have allowed grocers to serve sample shots of hard liquor. Doyle also highlighted investments in health care, and emphasized that the budget maintains fiscal responsibility. "This is a budget that is going to be tough on state government. We'll get by, and I'm confident that we can do it without layoffs," Doyle said. "But we're going to have to do it by really tightening our belts."