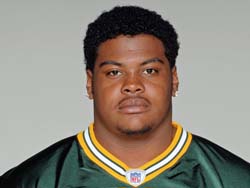 Green Bay Packers Rookie first round draft pick Justin Harrell (pictured) suffered what's been described as a serious ankle sprain on Tuesday and has been ruled out of Monday nights game in Denver against the Broncos.

Harrell played in the teams last two games, after going inactive for the first four games.  Harrell could miss a couple of weeks and may find it difficult to get back into the defensive line rotation upon his return.