You are here: Home / Politics / Govt / Obama calls for change during Madison rally 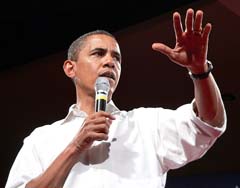 A crowd of nearly four-thousand converged on Madison's Monona Terrace Monday for a campaign rally and fundraiser for Senator Barack Obama (D-IL).

The Democratic presidential hopeful spoke to the crowd about the need for change in America and in Washington D.C. Obama says the nation has a chance to rise up in the next election and make America all that it can be.

Obama also talked about the war in Iraq and how it has been a disaster for this country. Calls from the Senator to end the war before the election were met with loud applause and cheers from the crowd.

The first-term US Senator from Illinois has been criticized for his lack of experience in Washington. Obama says many of the nation's problems are being caused by those who've been around for too long and that a long resume doesn't guarantee good judgment.

After Monday morning's campaign rally, the Senator was also scheduled to attend a private fundraiser in Madison.