You are here: Home / Packers / Packers' Robinson could comeback as kick returner 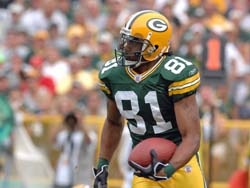 Koren Robinson could get his first chance with the Packers following his year long suspension, as a kick returner.

Robinson took reps during practice on Thursday and is expected to continue the same today (Friday) and tomorrow.  The Green Packers play Monday night in Denver against the Broncos.

It would be Robinson's second stint as the kickoff return man with the Packers.  He was given those responsibilities when he joined the Packers after the first week of last season.  in four games, he averaged 21.1 yards per return.

Robinson dropped a pair of attempts with the No. kickoff return unit in practice on Thursday, but still has more time to prepare himself for the job.

Robinson is also trying to win some playing time at wide receiver, but it's more likely that he'll get work as a special teamer before the Packers would throw him in at wide receiver.

Listen / Download – Koren Robinson says a return on MNF would be special to him. :26