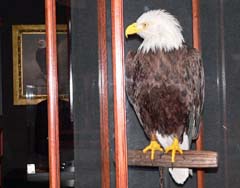 Pets offer comfort and companionship during trying times for many of us, including our troops.

War is arguably one of the most stressful situations one can experience. Many GIs over the years have used animals to defuse tension and keep their sanity.

“This is not anything new. I think, at least among Wisconsin troops, they’re looking for something that makes them feel like they used to at home when they may have had pets or some familiar animal companions, like dogs and cats.”

Dr. Richard Zeitlin (pronounce) , Director of the Wisconsin Veterans Museum , says pets provide soldiers a sense of normalcy, with the comfort of home. Colleges have had mascots throughout history; similarly Wisconsin’s military history has been marked by mascots. Zeitlin says some pets included a bear, a lion and a monkey, but perhaps the most famous is Old Abe , the Civil War eagle, which was a mascot of the 8th Wisconsin infantry from 1861 to 1864.

“He was in 43 battles, never wounded, really did raise the morale and operate as a symbol for the men. After the war, Old Abe remained a popular symbol of Civil War service and sacrifice right up until the end of his life which was in 1881.”

Even today you’ll see schools and other entities named after Old Abe (replica) particularity in his home region of Eau Claire and Chippewa Falls. Zeitlin says the state Veterans Museum is opening a new exhibit, displaying the variety pets and mascots which accompanied Wisconsin troops over the years.

“We’re always looking for new ideas (for exhibits) and in the review of our own collections we came across photographs. One is struck by the frequency of pets and mascots being in pictures in the historical photographic collections that we maintain.”

Zeitlin recalls another famous pet was the WWI carrier pigeon that saved a Wisconsin unit known as the lost battalion, from the Germans. Cher Ami , French for dear friend, was ultimately decorated by the government of France with the Croix de Guerre (cross of war).

NOTE1: Croix de Guerre is the highest military medal awarded by France —similar to the U.S. Medal of Honor.

NOTE2: The Wisconsin Veterans Museum’s new exhibit is called “Let slip the mascots of war! Pets in the Military from the Civil War to Iraq.” The exhibit remains on display through January 31, 2008.

TRIVIA: Old Abe was stuffed and displayed in the capitol, but was destroyed when the capitol burned to the ground in 1904.