You are here: Home / Military / Back to Iraq 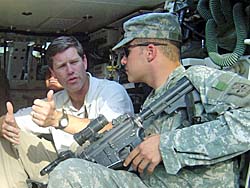 A Wisconsin congressman is making a fourth trip to Iraq. La Crosse Democrat Ron Kind wants to gauge troop morale, investigate no bid contracts, and find out why Iraqi reconciliation is not happening. “I am afraid that they aer squandering, wasting, this episode of reduced violence in Iraq, which the surge is bringing about,” said Kind, adding that even Secretary of State Condeleezza Rice admitted this week that there has not been as much progress as hoped, towards reconciling Iraq's warring factions.

Noting the U.S. has been in Iraq for longer than it fought Word War II, Kind again called for measurable benchmarks of Iraqi progress to be tied to withdrawal of U.S. forces, but he remains pessimistic that the Bush White House will change its strategy. Kind and other members of Congress will travel to Iraq November 29th to December 4th.