You are here: Home / Badgers / Badgers close out exhibition season with win 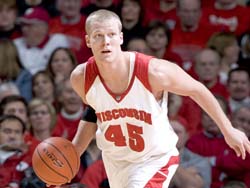 The University of Wisconsin men's basketball team closed out its exhibition season with a 74-35 win over UW-Eau Claire at the Kohl Center on Wednesday night.

The Badgers were led by junior Joe Krabbenhoft (pictured) and sophomore Trevon Hughes who each tallied 13 points.  Krabbenhoft also pulled down 7 rebounds and dished out 3 assists.

The Badger big men controlled the paint, outscoring the Blugolds 38-8 in the lane and had a 17-0 advantage on second chance opportunities.

The game marked the fifth time Wisconsin has hosted a WIAC school in exhibition play.  The Badgers are 5-0 and have an average scoring margin of 37.6 points per game.

The Badgers open up their regular-season Sunday against Indiana-Purdue Fort Wayne at 5pm at the Kohl Center.