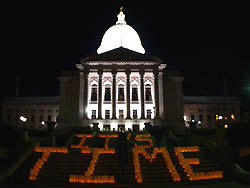 On the Great American SmokeOut , the American Cancer Society lights candles on the capitol steps.

The 99,000 candles represent lives that will be saved because of the $1.00 a pack cigarette tax increase, according to Alison Prange with American Cancer Society. That includes the 33,000 smokers who will quit smoking and twice as many kids who will never light up in the first place.

"That's 66,000 children in Wisconsin that will not light a cigarette and will not become lifetime smokers. And that's a huge thing when you talk about the burden of tobacco and the health care costs associated with smoking."

The candles spell out the words "It's Time" in support of a statewide smoking ban (SB-150) prohibiting smoking in all public places in Wisconsin, including public buildings, workplaces, restaurants, and taverns.

"We're lighting the capitol with hope in honor of 99,000 lives that are gonna be saved in Wisconsin because of the dollar tobacco tax -cigarette tax increase.

Prange says the idea of the Great American SmokeOut is that if a smoker can quit for just one day, maybe it will lead them on the road to a lifetime of not smoking. According to the US Surgeon General, people who quit smoking live longer than people who continue to smoke and can decrease the risk of multiple types of cancers. (800-227-2345)