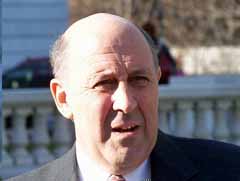 Lawmakers will be in Madison next month to consider a reform package from the Governor. Campaign finance reform advocates, like Jay Heck of Common Cause of Wisconsin, have been calling on Governor Jim Doyle to call a special session on campaign finance reform. "It's not going to be easy to do this," says Heck. "But, whatever comes out of this special session, hopefully it will be something that will really make a difference in the system that we have in place right now." The current system of financing campaigns in Wisconsin, says Heck, is "thoroughly and absolutely broken."

Mike McCabe with the Wisconsin Democracy Campaign believes voters are getting fed up with state politics, and Doyle's decision to call a special session may be seen as a reaction to that. "There's no guarantee as to what the outcome is going to be," notes McCabe. "But I think what this special session call does, is it puts the legislature on the spot."

Doyle has called a special session of the legislature for December 11, to take action on a reform package which includes increasing candidates' spending limits and maximum public grant amounts, a ban on fundraising during the budget process, and establishing a separate fully-funded campaign finance system for the state Supreme Court.