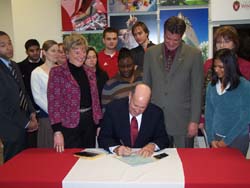 Taking time off because of an illness can be a difficult choice for some college students, since many providers won't continue insurance coverage. Legislation signed by Governor Jim Doyle will keep them from facing that problem in the future though. The law allows students to take a leave of absence from their studies because of illness for up to one year, while retaining their health insurance.

The Governor says it keeps students from having to face a difficult decision between their health and an education.

The bill was brought to lawmakers' attention by UW-Marinette student, Zach Grun. Grun underwent two major surgeries and didn't feel ready to return to school. However, he was forced to keep a full course load or he'd lose his health insurance.

The law was also inspired by Michelle's Law in New Hampshire, which was based on the plight of Michelle Morse. She died from colon cancer in 2005, but had to keep a full course load while undergoing treatment so she could keep her health insurance.