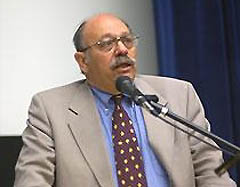 Lawmakers hear from experts at a capitol hearing about the medicinal use of marijuana.

Dr. David Bearman is one of thousands of medical doctors who supports legalizing pot for patients.

"The fact of the matter is is that 75-to-80% of Americans in any poll done in the last 25 years has favored the legalization of medical marijuana."

The California physician who graduated from the University of Wisconsin says it's next to impossible for patients suffering from debilitating pain to find a doctor to prescribe medical marijuana. One such victim was relieved to find Dr. Bearman.

"…broke down in tears and said 'You know I'm not a criminal. This is the only thing that works.' I mean, you be really put to tears yourself to hear the stories of some of these people who say 'I would commit suicide if it hadn't been for marijuana because it relieves my pain like nothing else.'"

Dr. Bearman testified at an informational Health Committee hearing at the state capitol in support of the controversial drug. As for prescribing legal painkillers for patients in pain, Bearman says if they can find one that even works, there are usually too many side effects, so patients must take other medications to alleviate those side effects, only to create new ones, which need more meds. He says these people are not criminals.

"It's pretty absurd for the federal government to be expending precious federal dollars going around arresting people with multiple sclerosis, Parkinson's disease and failed back syndrome."

Dr. Bearman says he pre-screens each patient to make sure they have a well-documented, bona fide diagnosis. Opponents worry about the potential for abuse, saying people might use it for recreational use.

"Well I think that if we were to use that logic for all drugs we would have very few medications available for physicians to use. All drugs have an abuse potential."

Bearman has a 40-year history as a professional in providing drug abuse treatment and prevention. He says the "potential for abuse" argument is "totally bogus." Meanwhile, Bearman says many people are using alternative medicines, so their doctors would be wise to be aware of the various medications their patient is taking.

Dr. David Bearman is originally from Rice Lake, Wisconsin. He graduated from the UW in '63 before eventually finding his way to California.