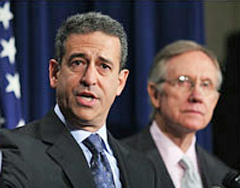 If violence is down in Iraq, the U.S. ought to pull forces out. That's the argument put forward today, by Wisconsin Democrat, U.S. Senator Russ Feingold. “The American people voted a year ago, to end the war, and we haven't followed through,” said Feingold . “The bridge fund passed by the House yesterday isn't good enough. A goal for redeployment doesn't cut it. We need a binding deadline, which means we need to pass the Feingold-Reid bill.” Legislation from Feingold and Senate Majority Leader Harry Reid would end funding for the war once most U.S. troops are redeployed by the end of June, 2008. The House on Wednesday passed a supplemental spending bill which would require a “limited presence” in Iraq by December of 2008. “If my colleagues think the surge is working and violence is down, let's get out while the getting is good,” said Feingold.