You are here: Home / Badgers / Flowers returns to Badgers 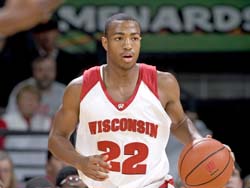 Michael Flowers has returned to the Wisconsin men's basketball team, two weeks after taking a leave of absence.

Flowers wasn't available for comment following the workout, but coach Bo Ryan told the Milwaukee Journal Sentinel  that Flowers would play in the team's exhibition opener against Edgewood College at 7pm Sunday at the Kohl Center.

The 6'2 Flowers averaged 7.2 points, 3.9 rebounds and a team-high 2.9 assists per game last season when he was named to the Big Ten's All Defensive Team.