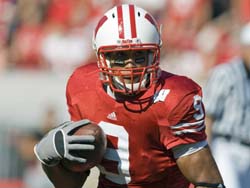 Four Wisconsin football players earned first-team All-Big Ten honors on Monday.  It's the most first-teamers for the Badgers since the 2004 team had a total of five.