You are here: Home / Packers / Kampman named NFC defensive player of the month 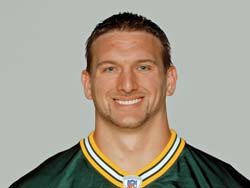 Green Bay Packers defensive end Aaron Kampman had an NFC-best 5.5 sacks in three games during the month of October and has been named the NFC's Defensive Player of the Month.

Kampman is tied for second in the NFL with eight sacks.  He registered two sacks in a 17-14 win over the Washington Redskins and then tallied three more in a 19-13 overtime win over the Denver Broncos.

Since the start of the 2006 season, the Pro Bowl defensive end leads the NFL with 23.5 sacks.

Kampman is in his 6th season out of Iowa.