You are here: Home / News / Keep your eyes open for deer on the roads 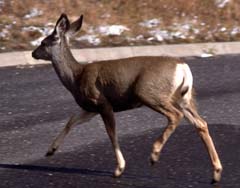 Nevermind the price of gas, a bigger worry for holiday travelers is darting deer.

Considering the fall deer mating season, the 9-day gun-deer hunting season and earlier nightfall, odds are extremely high that motorists will encounter deer on the roads this holiday weekend, particularly in rural areas.

"A lot of hunters out there, a lot of deer moving around, so it's very important to allow plenty of extra time and drive with extra caution."

Wisconsin Triple-A's Pam Moen says more vehicle-deer crashes occur in the Badger State during October and November than at any other time of year. According to the Wisconsin Department of Transportation, deer are the third most common objects struck by drivers, behind only other vehicles and fixed objects. Moen says, in addition to deer, drivers should take other precautions.

"We can never say enough to please slow down, allow extra time, make sure that you wear your seatbelt, watch out for the deer, and whatever you do … don't drive if you've been drinking for the holidays."

In 2006, seven people were killed and another 633 were injured in vehicle-deer crashes on state roads, according to the DOT. There were 17,878 officially-reported vehicle-deer crashes in 2006. However, we know there were more because the DNR removed 36,900 deer carcasses from the roadways. If you see one deer, expect more nearby. Do not swerve; you could lose control.