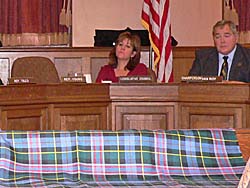 A proposal at the state capitol (AB 212) would designate an official state tartan.

It's a plaid pattern woven into Scottish garments. At a committee hearing, David Berger of the St. Andrews Society of Milwaukee says when he's wearing it, people will know he's from Wisconsin.

"A tartan in a sense is really a signature. It's like signing your name in a sense in that it gives opportunity for recognition of an area or a region or a clan name, a clan designation."

Robert McWilliam, also of St. Andrews, says he travels a lot and likes to give a gift as a token of Wisconsin, but cheese doesn't always cut it.

"Sometimes if the cheese had been in the back seat or the trunk of the truck or the car on a July day it just wasn't be presentable. Also when the cheese was gone, the idea of Wisconsin was gone."

And McWilliam says it would be wonderful to have something symbolic of the Wisconsin Celtic community and of the industrial and natural resources of our state. The bill's author Representative Tom Lothian ( pronounce ) (R-Williams Bay) says the Wisconsin legislature has already recognized a wide variety of state symbols , including a state song, dance, fruit, mineral, bird, and more. So, why not a tartan? In case you're wondering, Lothian did not give his testimony in a kilt.

Thirty-eight states already have an official tartan designation, including our neighbors in Minnesota, Illinois, Iowa, Michigan and Indiana.

The Committee on State Affairs held the public hearing on Wednesday at the state capitol.

The design is a hunting tartan, incorporating the colors of notable Scottish American family. Colors represent the natural resources and industries of Wisconsin.