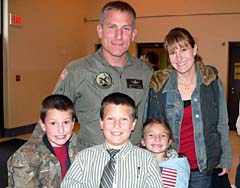 While the soldiers are appreciated for their service, their families actually got much of the spotlight Tuesday when the final 30 Wisconsin Army National Guard aviators returned to Madison after a year in Kosovo.

“In some ways, the soldiers have it easier. They have a mission and every day they wake up and they have a specific job to get done and they do that job every day. It's the people at home wondering, worrying, waiting for word that in many ways have it tougher.”

In fact, Zach Breunig knows exactly how long his dad has been gone.

But, while Zach's dad served in support of NATO peacekeeping and stabilization efforts in Kosovo, Zach says at least they were able to communicate with each other.

Zach's sister Kate says she really enjoyed hearing from her dad while he was overseas.

“Pictures that he sent. He growed a mustache!”

But, her dad's not the only one who's changed since they last saw each other.

One thing's for sure, her dad Greg knows what's most important about being back.

“Back with your family.”

About 50 other battalion soldiers returned home Friday afternoon and have been released from duty. With the return of 1st Battalion, 147th Aviation, the Wisconsin National Guard has about 320 soldiers and airmen serving on active duty in various locations.