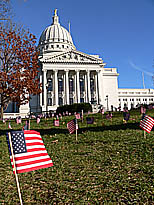 As we honor those who've served our country, a Congressional Resolution establishes a “ Veterans History Project Week .”

We're losing about 16-hundred military veterans a day, so Congressman Ron Kind says time is of the essence. The La Crosse Democrat says when veterans pass away they take their valuable memories with them. So, Kind is using this week to encourage families to document the stories of the GIs in their lives.

Already over 50,000 stories have been submitted to the Library of Congress . Kind says, the recent Ken Burns' documentary of the war, which aired on PBS, has triggered more people to inquire about the Veterans History Project.

“And if you see the Ken Burns series, you see how well and how effective he used the oral stories – the stories of veterans who were there that experienced it firsthand. And what a powerful testimony that was, and it literally brings history to life.”

While it's important to document the individual accounts of the older veterans, Kind says we mustn't forget about the younger generation.

“What better time than when they are just coming from theater, whether it's Iraq, Afghanistan or even serving anywhere abroad right now … to have them sit down while things are still fresh in their memory. But, having said that I'm amazed at how lucid the memories are even from the Second World War, Korea-generation veterans. It's as if they lived it yesterday.”

You can see many of the oral histories or get more information by visiting the Library of Congress website.