You are here: Home / Packers / Blackmon named Special Teams Player of the Week 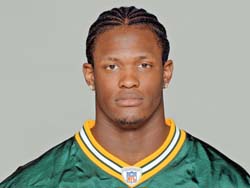 Green Bay Packers defensive back Will Blackmon is the NFC's Special Teams Player of the Week after scoring two touchdowns in Sunday's win over the Oakland Raiders.

Blackmon recovered a fumbled punt in the endzone for a score and added a 57 yard punt return for a touchdown.  It was Blackmon's first game of the season as the teams primary punt returner.  He's expected to continue in that role while Charles Woodson recovers from the toe injury he sustained returning a punt in the Thanksgiving Day game at Detroit.