You are here: Home / Military / Feingold hopeful next prez can stop ‘sinkhole’ in Iraq 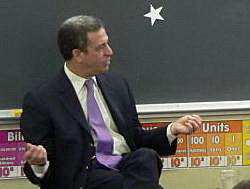 A Wisconsin member of Congress is disappointed with the President and with his colleagues on both sides of the political aisle for not getting our troops out of Iraq.

As the biggest opponent of the War in Iraq since before our military was deployed almost five years ago, U.S. Senator Russ Feingold (D-Middleton) says it gets "frustrating" talking about Iraq while his words fall on deaf ears.

"Well it's painful to keep talking about it and to not have colleagues follow the will of the American people. It is clear; it was expressed very clearly last year; it's very sad when the President and the Senate and the House don't respond to the people."

In fact, the Middleton Democrat says, foreign relations and the war in Iraq are the issues most talked about by residents in the Badger State. Feingold wants the federal government to "end this misguided war, before more Americans are injured and killed." Regardless of his colleagues' complacency on the issue, Feingold says it's his job to press on for his constituents.

"It's difficult. A lot of my colleagues don't want to talk about it. We'll have a new president in a few months, and I'm hoping that person will do what makes sense, which is to stop this sinkhole that is destroying our military and our economy."

But, which presidential candidate is best suited to bring our soldiers home?

"Well, I'm not going to say that because that's almost like an endorsement, but I do feel that the Democratic candidates by and large are more likely to do that. The Republican candidates are clearly committed to a longer stay."

It's not just the GOP Feingold criticizes; He's also "disappointed" with his own party's efforts, or lack thereof, to end the war. Feingold says US lawmakers are simply "pushing this problem off to the next president."

Nearly 4,000 Americans have died since March 2003 and almost 30,000 have been wounded in Operation Iraqi Freedom — a war Feingold says is "exhausting our country, over-stretching our military, and tarnishing our credibility." Approximately 160,000 soldiers remain in Iraq. ( DoD )

As for George W. Bush, Feingold believes he's the worst U.S. president ever … but says on a personal level, he's a really likeable guy.