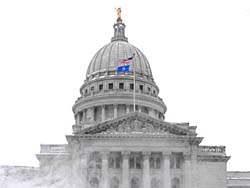 If one lawmaker has his way, all the American flags you see on government buildings in Wisconsin would actually be made in America.

If taxpayers are flipping the bill to put flags on government buildings, Democrat Representative Louis Molepske  ( pronounce ) (D-Stevens Point) says at the very least we should be able to wave a United States flag that's made in our own country.

Molepske says his legislation ( AB 450) is in honor of our military veterans and those who cherish the flag, which is very symbolic.

"The flag represents, for many people, the last symbol, the last expression, the last thought of a loved one laid to rest. And it's flown in battle, it flies at our public institutions, it represents America, we pledge allegience to it every day."

The bill recently week got unanimous support from the Committee on State Affairs. The measure is now with the Assembly Rules Committee, which Molepke is confident will bring it up in the full House.

"It's a bipartisan bill; it represents that which is the best in us … stars and stripes, patriotism, and American values."

Molepske says, considering Eder flags in Oak Creek is one of the largest manufacturers of flags in the US, we've got plenty of flags available. Also, this measure would help support American businesses and create pride in domestic products. The bill does not specify a penalty for violations. In case you're wondering, all of the flags at our state Capitol are purchased from a Wisconsin vendor — they're also manufactured in the Badger State.