You are here: Home / Education / UW-Madison Chancellor stepping down 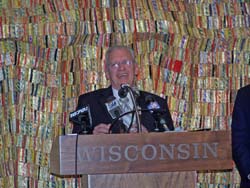 The Chancellor of the University of Wisconsin-Madison is stepping down. UW-Madison Chancellor John Wiley announced Friday that he will retire from his post in September of 2008.

Wiley says he'll be 65 in March and has been thinking about what he wants to do next for the past two years. He's served as Chancellor since 2001, but spent several decades as a UW student and member of the faculty.

Wiley says next fall is the right time for a new chancellor to take over, because it's in the middle of the budget biennium and several months before the UW goes for re-accreditation. He wants his replacement to have plenty of time to prepare for what the University will face in the future.

Wiley hopes to return to a faculty position within the University. However, he says it may not be possible to return to his former field of electrical engineering, because he's been out of the field since the late 1980s. Right now, Wiley says he'll be considering his options over the next nine months.

The Board of Regents plans to launch a national search for a new chancellor in January.